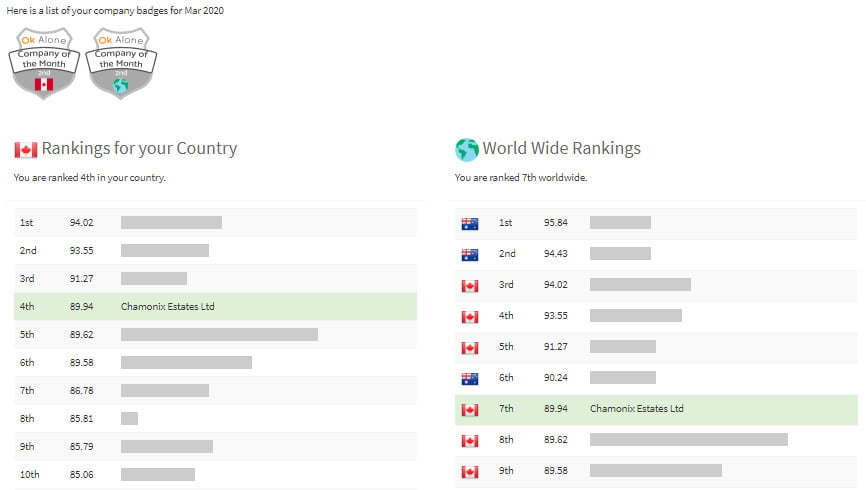 Our research found that motivating a workforce to think and act safely by encouraging worker involvement and collaboration can be achieved. The main way to encourage this is by creating a sense of competitiveness and comradery around the company’s main goal, keeping their people safe.

As a direct result of our findings, Ok Alone developed and released their Safety Awards program.

How do the Safety Awards work?

Every month each worker’s Ok Alone activity is reviewed, and they are awarded a number of badges for features used and milestones reached. A score out of 100 is awarded to each worker. This takes into account a number of safety factors including missed check ins, location monitoring, shift starts and check in reminders. Workers are then able to compare their ranking in relation to other workers in their company, their country and around the world.

How can Workers Improve their Ranking within their Company?

To get a ranking, workers must have completed some shifts in the Ok Alone system. The more workers use the system and stay safe, the higher their score will be. To start getting the highest scores, a worker must be using the app at least 3 times a week for shifts of 2 hours or more. Frequently using different features of the Ok Alone system will also increase a worker’s ranking.

How is the Company Ranking Calculated?

Company rankings show how your company’s safety scores compare to other companies in your country and around the world.

To calculate your company score, we take the average of your top 5 workers for the month. To be included in the ranking you must have at least 5 workers with a score higher than 0.

If you are not in Canada, The United Kingdom, The United States or Australia – we include you in the ‘Rest of the World’ and your country ranking will compare with countries such as New Zealand, Norway, Malaysia, Germany and other countries in the Ok Alone global community.

Why is this Helpful?

Companies are able to see their worker’s positions within the company ranking and see who is making an effort to help create a positive safety culture. Management will then be able to provide regular feedback and positive affirmation. Thus increasing worker morale and helping to instil a feeling of ownership for staff who are participating in the program.