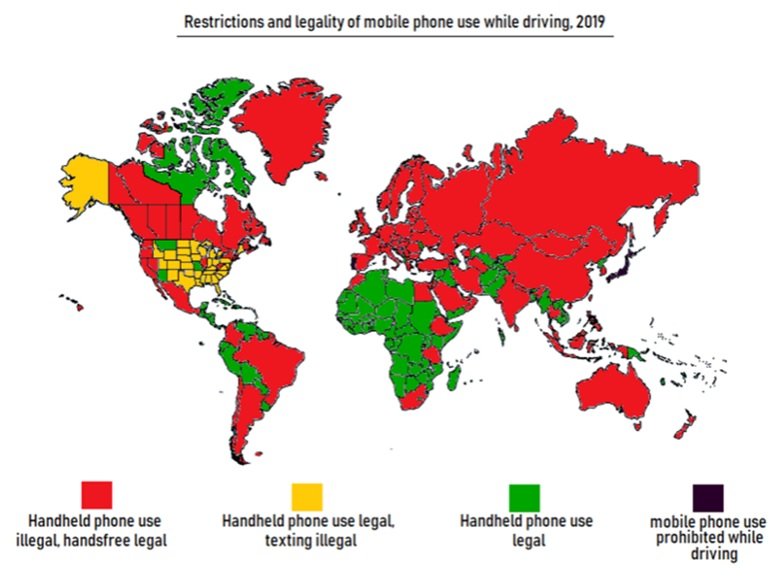 Many people are lone workers who drive for work and for them their vehicle is their office. However, to keep people safe, new legislation is being introduced all over the world to restrict the use of mobile phones whilst driving.

See below to find out how to comply with the laws where you work.

Australia has a total ban on all hand-held use of a cell phone, including texting, while driving or if the vehicle is stationary but not parked. The law does not apply if the phone is in a secured fixed mount that is positioned in such a way that the driver does not have to take their eyes off the road.  A hands-free kit must be used and must make the operation of the telephone completely voice-activated, and the driver may not touch the phone at any point. ²

New Zealand has a total ban on texting and hand-held use of a mobile phone while driving. In 2009, the New Zealand Government introduced new clauses to its Land Transport (Road User) Rule, which ban any use of mobile phones while driving, except for emergency calling to 111 if it is unsafe to stop the vehicle. ᵌ

Any use of a mobile phone is forbidden as long as the vehicle’s engine is running. Drivers are allowed to use hand-free devices, provided that they do not become distracted. ⁴

In the United Kingdom any use of a hand-held mobile phone or similar device while driving, or supervising a learner driver, is illegal. This includes when stopped at traffic lights. The only exceptions are emergency calls to 999 or 112. ⁴

Driving Laws affecting Lone Workers in the the United States

20 states in the United States ban the use of hand-held mobile phones whilst driving and 48 states ban text messaging. No state bans the total use of mobile phones, however 38 states have a total ban of phone use for teen and new drivers.

How can I stay within the law?

Luckily for people who drive for work there are plenty of apps that use voice commands. One such app is the Ok Alone lone worker app. This app lets you check in with your work place or request help without having to touch your phone.

Ok Alone are the first lone worker system to use hands free voice commands to ensure you’re compliant with the new laws and help keep you focussed on the road. The app is connected to a cloud-based dashboard system that allows workers to stay in touch with their supervisors throughout their shift and let them know if there are any problems.